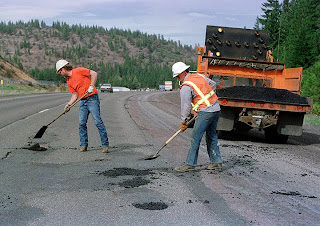 It's pothole season here in the Midwest. The months of snow, plow, salt and repeat are coming to an end and you would be amazed at the size of some of the potholes in the roads. We are talking flat tires, spilled drinks, and the occasional accident.

With the onset of pothole season brings the annual rolling traffic jam phenomenon when road crews shovel fresh asphalt out the back of a rolling motorcade of dump trucks to fill the holes.

During one of these rolling jams I was contemplating the paths my peers and I chose for employment in life. I have been getting back in touch with a lot of friends lately and one thing I noticed is a general malaise in what we do for a living. To distill it down, we are all working in roles that have been developed over the years and handed down from one generation to the next.

We find ourselves walking down these proven paths in life for a myriad of reasons. For me it was a safe road traveling previously laid paths to proven success as a way of providing for my family.

I personally believe schools are in the business to give us the tools we need to navigate the proven paths in life. Let’s face it, they want us to succeed and the easiest way to get there is what’s been done before. Maintaining the roads of years and years of proven success by adding safety rails, repainting the lines, and you guessed it, filling potholes...

My cancer experience and resulting Latitude epiphany have inspired me to put down my shovel and pick up a machete to start blazing trails of tomorrow in an effort to lift as many lives as possible.

School may have given me a shovel, but cancer gave me a machete...

Which do you choose?

*This website does not encourage reckless machete use. Machetes are for trail blazing only...