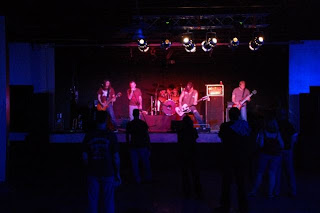 I have always loved music.

I sang in the choir, toiled in trumpet, kicked it around on the drums, and ultimately settled on guitar in my high school band:

Listening to music started my days and ended my days. On road trips it was usually The Big Chill movie soundtrack on repeat (really side 1, flip, side 2 in the tape deck...) and pop radio via Casey Kasem and the American Top 40.

The first group I got serious about in 6th grade when cable television graced my suburban cocoon was the Beastie Boys. I saw the video for "So What'cha Want" and dove head first into all of their albums. The key in 6th and 7th grade was to be able to name 5 songs so when people asked you what you were listening to on your Walkman you would sound like an expert.

Around 7th grade I got a hold of the Ten album by Pearl Jam probably 3-4 months before they became a force in the middle school music scene. That was my first taste of being ahead of the curve and man did I like it...

During my 8th grade summer in 1993 my family was vacationing in Boyne, MI and there was a little concert at the bottom of the ski slope with a sparse crowd featuring a band named The Verve Pipe. I bought all their tapes (yes, tapes) on the spot and wore them out as I mowed my lawn the rest of the summer.

Through The Verve Pipe I discovered the Aware series compilation which led me to the likes of Vertical Horizon, Train, John Mayer, Jack Johnson, and a CD rack of others well ahead of their pop radio prime.

As I got a little older I started going to tons of concerts. One thing you learn about up and coming bands is that they typically play to small rooms with corresponding small crowds often on random week nights. This is good for the music junky like me because you can really get to know bands. However, I have seen more than one promising band hit the graveyard after a few tours of low ticket sales or a label that doesn't have their true interests at heart.

But that's not where I am going with this one...

Occasionally I ran into artists that were on their path regardless of the number of tickets or CDs sold. These are the types that had figured out their passion early in life and were working tirelessly towards their craft. Sprinkle in some talent and you eventually find these artists accepting their Grammy's in front of the world.

As I launched my Latitude Movement I told my wife I was approaching it as a band that was playing their first gig. I knew that my parents, family, and friends would be there for support and as predicted, they showed up and bought t-shirts. As I venture out into the abyss for my subsequent gigs I know there are going to be instances where we I am just playing to the bartenders in back.

My Latitude concept is something I firmly believe will have a positive impact on the world and I am not going to stop pursuing it just because of low attendance or a bad review. I don't care how many gigs I have to play to spread my message. I know it is the right thing for me to do in any capacity I can spare on top of my other responsibilities in life.

Until then, keep tuning in for weekly updates on WhatsYourLatitude.com and join the movement!


PS - It would not be fair to withhold my current up and coming pick for greatness... Without further adieu, I give you The Co out of Nashville, TN. You can bet your ass I will be at their first Chicago gig...
Posted by Roger Lumpp at 8:56 PM