I was diagnosed with Nodular Sclerosis Hodgkin's Lymphoma in April 2010 based on the results of a lymph node biopsy in my neck which was ordered by my primary physician after a few months of bi-weekly blood work. Hodgkin's is a rare form of lymphoma within the lymphatic system that occurs in approximately 8,000 people (less than 0.5% of cancer diagnoses in the US) per year. The upside of hearing the words "you have Hodgkin's Lymphoma" is that the oncologist's next sentence is "if you are going to be diagnosed with cancer, this is the one you want to get"... Joy!

Hodgkin's is classified across 4 stages based on a bone marrow biopsy, CT scan, PET scan, (and for me a MRI) as follows:

There is also an A or B subclass where A means no other symptoms and B means you got to enjoy unexplained weight loss (I dropped ~20lbs while trying to eat as many calories as possible), constant low fevers, itchiness (I didn't really have this one), and sheet drenching night sweats. The night sweat thing was not just a little sweat on your brow. It was a through your t-shirt, through the bed sheet, wake up and physically not understand how you could have sweat that much. I grew up playing competitive hockey and NEVER sweat this much. I was going to sleep with a shirt on, with another under me, and another next to the bed in case the other two got soaked.

Based on my scans I learned that the cancer had spread through my lymphatic system into my groin area and I also had involvement (aka "lesions") on parts of my pelvic bone and spine. I did not have involvement in my bone marrow which was a bonus, not only because it sounds bad but also because I don't have to have frequent bone marrow biopsies. Those suckers were by far the most painful part of my cancer experience and I don't wish them on my worst enemy. 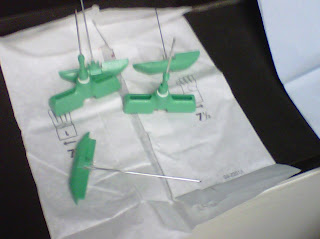 Here is a picture of the bone marrow biopsy torture devices that are corkscrewed into your pelvic bone in your lower back. Once inserted there is an electric shock type feeling theat helps the doctor collect the actual bone marrow. All I have to show for it is a small circular scar on either side of my spine... Kind of like a minimalist lower back tattoo. Thanks cancer!

So, that put me at Stage 4B. Sounds bad, but the good part of Hodgkin's is that it is very treatable. Even at my stage, I have a 10 year survival rate of 80-85% using first line treatment regimens. My oncologist put me on 8 cycles of ABVD chemotherapy which was administered every 15 days at his offices. A cycle contains 2 treatments so I was faced with 16 treatments, or 8 months of chemo.

It was a lot to take in at the time, but here I am on the eve of what would be my next chemo treatment. Christmas is a few days out, but for me it will come early tomorrow when instead of going to my oncologist's office I can enjoy the solitude of my wife's hometown on the edge of the Adirondack's in Northern New York.

I am nervous about not getting chemo anymore, but also excited to enter this new chapter of my life with a healthier mind, body, and soul.

And I look forward to sharing the lessons I learned over the last 8 months and my journey going forward with you...
Posted by Roger Lumpp at 9:23 PM